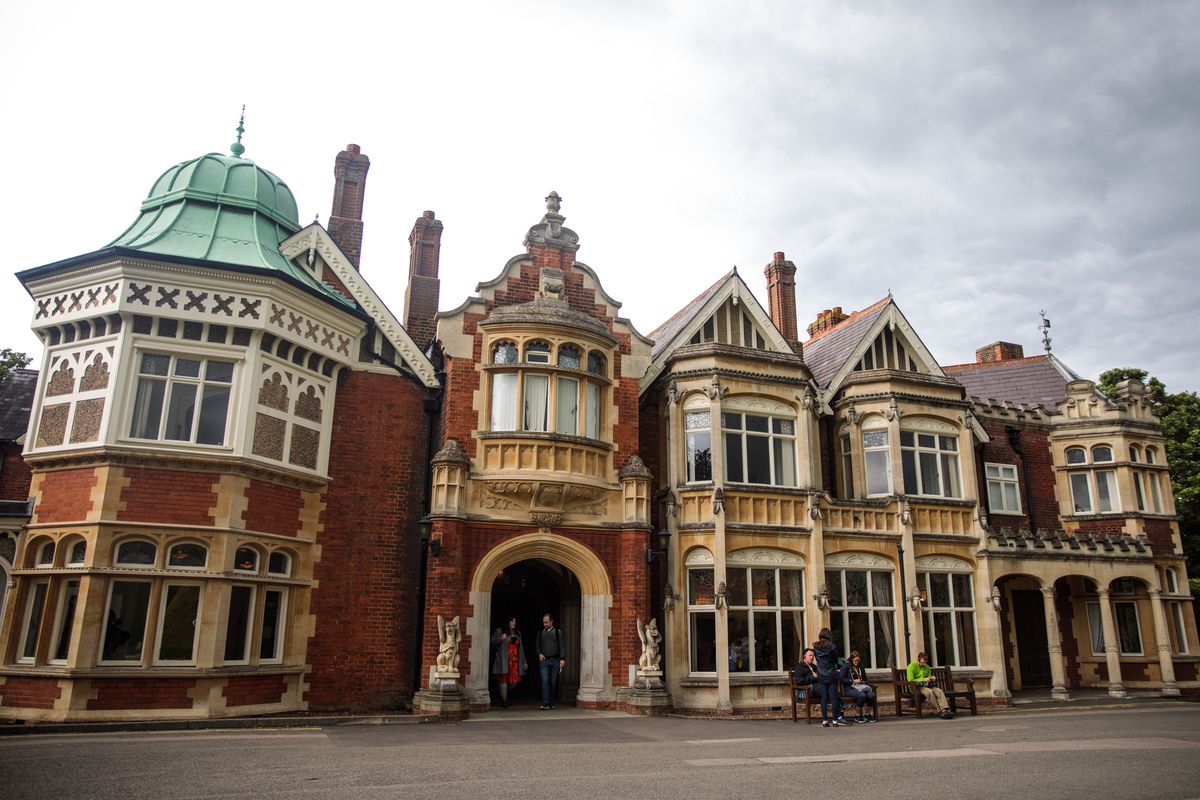 Alan Turing’s historic office in Bletchley Park. The former workspace of the genius mathematician and cryptanalyst responsible for cracking German Enigma codes during World War II doesn’t have the drama of the war rooms of London cabinets or the beaches of Normandy; yet it arguably has just as much historical weight.

As I stared at Turing’s typewriter, umbrella, and briefcase strewn around the room as if he had just stepped out for a drink, I tried to absorb the significance of what was going on there. Some historians claim that the indispensable work of Turing and other codebreakers shortened the war by two years.

During the last decade, The Bletchley Circle television series and The imitation game film helped re-insert Britain’s Bletchley park into the public consciousness. Part of a former country estate 80 kilometers northwest of London, Bletchley was turned into a top secret decryption factory during the war and ultimately played a key role in the Allied victory.

At its peak in early 1945, up to 9,000 people worked at the site, 75% of them women. All were sworn to secrecy and most had no idea how their work was used or what impact it had. Even when the war was over, they were largely forbidden to discuss it.

Today the complex, which spans 58 acres, contains an extensive museum including a new permanent exhibition called Intelligence Factory which was added in the spring of 2022. On a recent visit to Britain, I decided to visit him.

Located less than 45 minutes by train from London Euston, Bletchley Park was chosen by Britain’s Secret Intelligence Service as its main center of operations in 1938 due, in part, to its accessibility to the British capital.

Anchored by a grand Tudor-Gothic mansion built in the 1880s, the park is laid out around a peaceful lake surrounded by trees and lawns, and dominated by rows of utility buildings erected in the 1940s as the decryptor workforce was growing.

One of these buildings (Block C) houses the main entrance and visitor center. Here I paid for my ticket and was ushered into a darkened room where a short film introduced the site and its myriad exhibits. There’s plenty to absorb in Bletchley and the recommended visiting time is five hours (luckily there’s a good cafe for resting and recuperating).

Ardent mathematicians can ponder the intricacies of decrypting data. Those with a more cultural bent can learn about the vagaries of daily life at the park in the 1940s, from the monotony of food to the irritations of the wartime British Blackout. Scattered around the museum and grounds, you’ll come across vintage cars, rebuilt computers, and a moving film about D-Day.

For me the biggest attraction of the park is the way it explains the industrial scale of what happened at wartime Bletchley under a heavy veil of secrecy. Exhibits juxtaposing daily life with extraordinary research tell a complex yet compelling story that gives you a real sense of history.

The museum is quickly dispelling the long-held assumption that war was fought and won only by armies and soldiers. The Normandy landings would have been virtually impossible without the clever decoding that took place at Bletchley between 1942 and 1945, work that provided detailed insights into German defenses and troop movements, as well as the efficiency with which Hitler had been deceived about the location and time of D-Day.

Although not Downton Abbey, the Victorian mansion in the park is the most ornate of the many buildings. Most of the rooms retain their pared-down war furnishings today, although some original features remain: The painted glass ceiling in the antechamber is particularly striking. As the war progressed, the codebreakers and their support crews quickly overtook the mansion, and additional quarters were hastily built in a series of cement and wooden shacks around the lake.

It is in these stuffy, claustrophobic buildings that much of Bletchley’s daily life has been recreated. Small, dimly lit rooms and narrow hallways (once thick with cigarette smoke) evoke the heavy secrecy and cramped working conditions of the early 1940s. Many offices – including Turing’s in Cabin 8 – have been dressed to look exactly like they did during the war: jackets hung on coat racks, papers strewn across desks and rallying war posters urging people to save cardboard, knit socks and s refrain from being negligent. gossip.

A-level math students should gravitate to Block B for a glimpse of Bletchley’s early codebreakers. Focusing on the famous Enigma machines and their lesser-known counterpart, the Lorenz, visitors can delve into the intricacies of the masterful work done by British and Polish mathematicians to intercept and decipher German intelligence. While most of the details ran through my mind, I was able to enjoy some of the more artistic features of the museum, including a stunning slate statue of Alan Turing by British sculptor Stephen Kettle.

The new Intelligence Factory exhibition is more user-friendly and takes you on a labyrinthine journey through a series of interconnected rooms furnished with interactive maps, touchscreens and fascinating vignettes about the urgent and powerful work that laid the foundations of computing. modern. . As I charted its course, I was struck by Bletchley’s audacious ambition – the hasty recruitment programs, accelerated training and endless paperwork – all set up virtually overnight in complete secrecy.

Leaving the site in the middle of the afternoon, my head still full of facts and formulas, I got back on the Euston train and tried to put things into perspective. It was an enlightening and humbling visit. At Bletchley, it was not just the military elites who decided the fate of armies and navies, it was a melting pot of dynamic minds who were recruited, whatever their background, to undertake crucial behind-the-scenes tasks that helped to win the war. We owe them a huge debt.

Boy saving energy at the press, in his factory