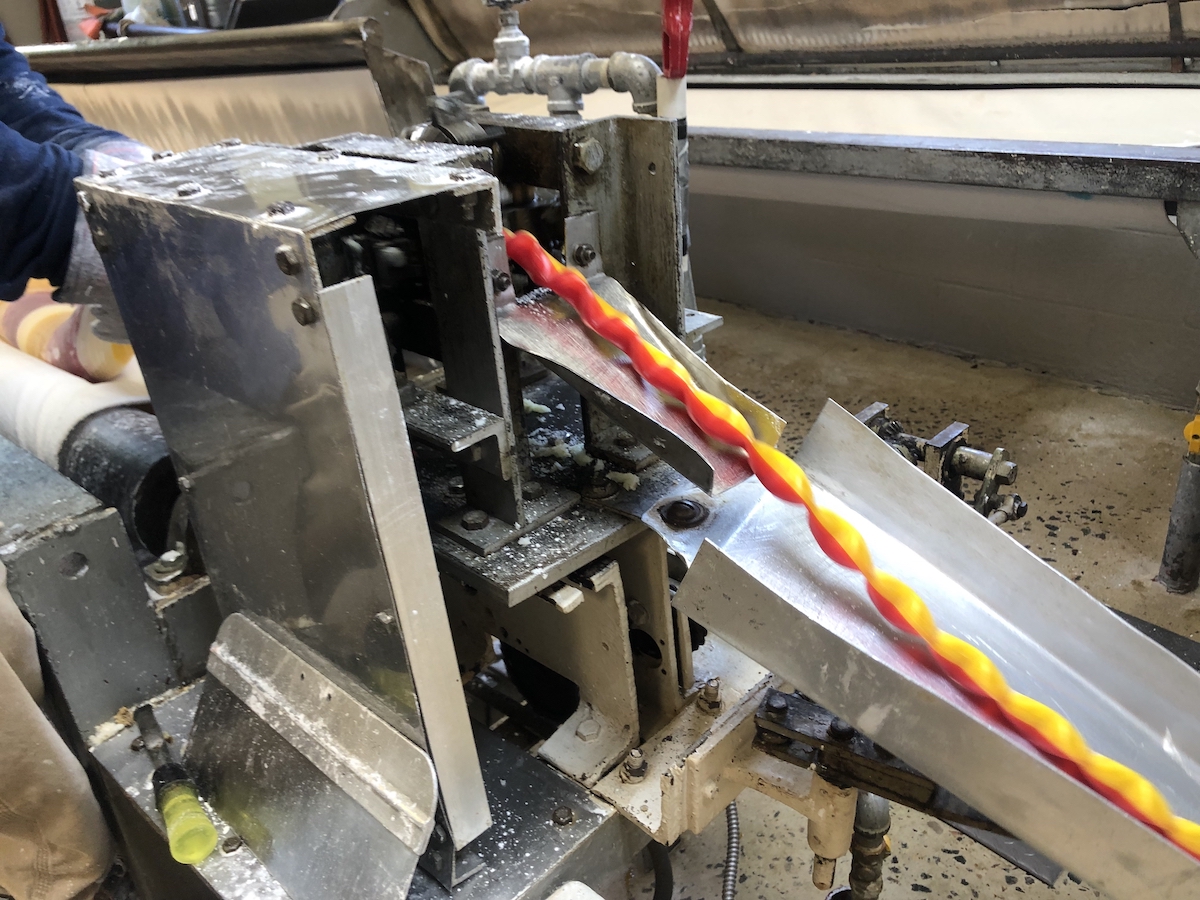 I had a sweet experience at the HE Williams Candy Company in the South Norfolk area near Chesapeake, Virginia – and the candies were even sweeter. HE Williams is a third-generation, family-owned company that has been in operation since 1919. They make candies the old-fashioned way, mostly by hand, in a one-room, 4,000 square foot factory. They even use the same recipe their grandfather, the company founder, used when the company started.

I visited the HE Williams Candy Company as part of a press trip with Visit Chesapeake. All opinions are mine.

I’ve never been a big fan of hard candy, but my visit to HE Williams Candy Company changed my mind. Their candies are delicious, have great flavor, and in many cases have an extra splash of flavor inside the hard candy.

The Williams family uses the same recipe used by the company’s founder in 1919. Their candies are made in 100 pound batches and the quality is not skimped. They use 30 pounds of corn syrup, 70 pounds of sugar, and a gallon of water to make each batch.

They bake the sweets in the same copper pots their grandfather used when he started the business. They use the same taffy machine that he has used since 1908.

HE Williams is known for its famous Peach Buds. This particular hard candy is peach flavored and filled with a chewy coconut mix. It smells great when done and tastes even better. I bought several bags of these tasty candies to take home.

Other flavors include Mint Puffs, Pineapple Lumps, and Fancy Mix. My favorites were Banana, Hot Rocks and Peach Buds.

They also make a few soft and chewy candies such as Coconut Tricolores.

The day we visited, brothers David and Joe Williams were making a batch of delicious Peach Buds. David told us about the history of the company and explained the process of making the delicious treats.

Their grandfather started the Candy Company when he thought he would lose his job. By the 1930s, the company employed over 100 workers at the original factory along the South Arm of the Elizabeth River. They sold the candies all over the United States

Their grandfather installed railroad tracks at each end of the factory to keep up with demand. Sugar and syrup were delivered directly to the back of the factory by train. They loaded the trains with delicious sweets at the front.

Over the years things changed and candy sales plummeted during the war. For a time, part of the factory was rented out to others. Along came I-464, and the plant had to move east in 1982. They downsized and moved into a smaller building where they are now.

Their family has been making specialist hard candy in South Norfolk for over 100 years. Every step was done by hand when their grandfather started the business. The equipment and methods have not changed for over a century. This is still mostly done by hand, but instead of two humans lifting the heavy hot cauldrons of liquid candy, they use a hoist or pulley. They also added a motor to the tape machine which previously required a self-contained crank.

Have you ever wondered how hard candy is made? We go to the store and buy candy; not much of our thought goes into how it’s made.

We were able to get up close to see the fascinating process of making old-fashioned hard candies.

At HE Williams Candy Company, the ingredients for the hard candies are mixed in the old copper pots. While cooking, they combine 20 pounds of coconut mix and cook it. They also mix colors for hard candies. The day we visited they used orange, yellow and red for the peach buds.

The mixture is then boiled until it is well mixed and reaches the required temperature. Once the candy’s liquid reaches 301 degrees Fahrenheit, they use the pulley to lift the jar and pour it onto cooling trays with cold water flowing below the surface. Then they smooth it out.

Now it’s time to add the colors. Each third of the lot is respectively yellow, orange and red. Once it starts to cool and harden at the bottom, they start separating the colored candies and folding each section, then kneading them like bread to make sure the color is blended in, eventually making one big one ball. Each of the balls weighs between 33 and 50 pounds.

They use a 1908 taffy spinning machine that has been spinning their candy since the start of the business. Spinning improves coloring and adds air to the candy. Flavor is also added during the spinning process.

Then they layer and stack the colored candies, add the coconut mixture, and wrap the candies around the coconut. It is unrolled to create a log of sweet candies that are still warm and have the consistency of taffy. They feed this into a ribbon machine which crimps it and creates a ribbon of hard candy.

It is then placed on a conveyor belt to continue cooling and hardening. At the end of the conveyor, it is deposited on another tray where they break the pieces before it is completely cooled.

As you can imagine, the candy smelled heavenly, sweet and delicious during this process.

Once the candies are cold, they are bagged and tagged for sale with simple white card stock tags.

This factory makes candy the old-fashioned way, and they also run their business that way. They don’t have a website, don’t advertise, and don’t accept credit cards.

Word of mouth is their best advertisement. Word spreads when you have a great product. Before the holiday season, they make sweets 7 days a week to keep up with demand. David said, “If we were advertising, we had to hire more people and get a bigger building.”

They don’t even have a computer. Their modern equipment is a telephone and an answering machine. They have one Facebook page which is generally active from October to December.

You can visit their candy business and purchase items directly from the candy-making workshop. Or call and give them your order. When they get your check or money order in the mail, they’ll send you the hard candies. You can buy one bag or buy several bags in bulk. When buying in larger quantities, you can mix and match flavors. After your visit or your first order, I bet you will be like me and love their delicious hard candies.

If you want some for the holidays to give as a gift or to keep for your enjoyment, HE Williams Candy Company in South Norfolk is the place to get it!

Pro Tip: The best time to visit would be between October and December when they make multiple batches each day and have the most variety. Check their Facebook page to be sure of opening hours.