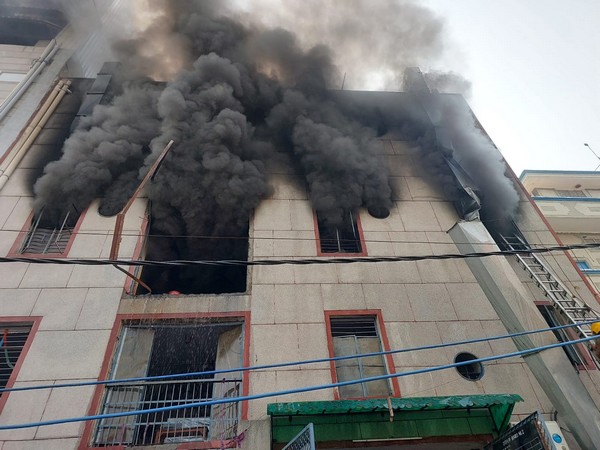 New Delhi [India]Nov 01 (ANI): Delhi Police on Tuesday filed a case under Indian Penal Code articles against the owner of a shoe factory in Narela following a fire on Tuesday that left 2 dead and 18 injured .
The owner of the shoe factory is identified as Sahil Garg (30), a resident of Pitampura.
A massive fire broke out Tuesday morning at the shoe factory in Narela, the nation’s capital, injuring 18 and killing 2, officials said, adding it was later extinguished.
The injured were transferred to Ram Manohar Lohia and Safdarjung hospitals and are being treated.
“Today at around 9.41 a.m. a PCR call was received stating that a fire had started on the second floor of a shoe factory in Block E of the Narela Industrial Zone. Immediately a team was rushed at the scene of the incident. A total of 20 people have been rescued out of which 18 are under treatment and 2 have died,” Outer North Delhi DCP Devesh Kumar Mahla told ANI.
“We received a PCR call around 9:35 a.m. regarding the incident. Immediately 15 fire tenders were put into operation. There were raw materials and chemicals in the plant, due to which the fire spread,” said Sandeep Duggal, DO Delhi Fire Department. ANI.
Citing a contractor working at the factory, Duggal said there were 300 people at that factory who got out on their own and neighbors had set up ladders, helping people evacuate the building.

An underage boy, looking for his mother, told ANI that his mother, namely Afsana, who worked in the shoe factory, is missing. “The police tried to get rid of me when I asked them about my mother. My father who works in a nearby factory is also looking for her,” an underage boy said in a broken voice.
A factory worker namely Ritesh Kumar said: “I arrived at the factory a bit late. After seeing smoke coming out, I called my mate and he said his hands and his feet had been burned.”
“About 16-17 people were working on the ground, where the fire happened. It was learned that there was an explosion in which my partner was also injured,” Ritesh told ANI.
Another Geeta worker said, “Today I had a fever, because of which I didn’t come today. a fire has occurred.”
Security officer Sajjan Singh said a drum exploded on the second floor of the factory, and after that the fire spread up and down, about 17 to 18 people were working on that floor, and they got out of the building with difficulty after some time. “Sahil Garg is the owner of the factory. He stays here during the works,” he added.
Notably, a machine inside the plant exploded due to which the fire took place.
“The FIR is registered under 287/337/304/34 of the Indian Penal Code (IPC). Factory owner Sahil Garg has fled from the police. We have formed teams to arrest him,” said officials.
The police are investigating the case. Further information is awaited. (ANI)