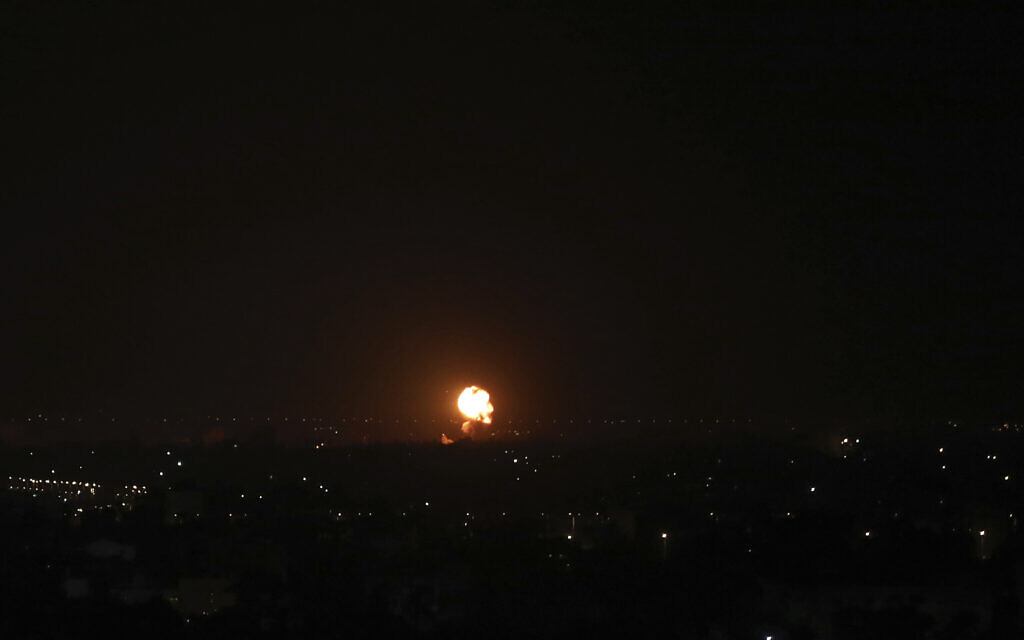 The Israeli army struck the Gaza Strip early Friday morning, hours after four rockets were launched at Israel from the Hamas-ruled Palestinian enclave.

The Israel Defense Forces said it launched airstrikes on a “unique” underground rocket-making factory used by the Hamas terror group.

This posted a satellite photo of what he said was the site, showing an area near several buildings and agricultural plots on the northwestern edge of the al-Maghazi refugee camp in central Gaza. This is the third such facility affected since April.

“The strike was carried out in response to firing from Gaza territory into Israeli territory earlier in the evening,” the IDF said in a statement shortly before 4 a.m.

The commander of the IDF Southern Command’s so-called “firing center”, which coordinates the unit’s offensive operations, said the site was bombarded with 19 tons of ammunition.

“This will result in harming the Hamas terror group’s attempts to strengthen and arm itself,” said Colonel Yud, who can only be identified by the initial of his first name in Hebrew.

The Palestinian Shehab news agency said a “resistance site” in al-Maghazi had been hit.

No injuries were reported immediately.

Photos shared on social media showed fireballs and smoke in Gaza during the airstrikes. Successive strikes could be seen hitting the same area repeatedly in unverified video footage as jet planes roared overhead.

Amid the strikes, Palestinians apparently fired heavy machine gun fire at Israeli planes over the coastal enclave. At least one house in the southern town of Sderot was hit by a large bullet as it fell to earth.

The retaliatory attack came after four rockets were launched from the Gaza Strip towards Israel on Thursday.

One rocket was intercepted by the Iron Dome air defense system over a border town, and the other three failed in the Gaza Strip, according to the Israeli military.

No injuries or damage were reported as a result of the rocket attacks.

No Palestinian group claimed responsibility for the launches, but the IDF said it held Hamas responsible.

The rocket fire came hours after a member of the Palestinian Islamic Jihad was kill during an Israeli military operation in the West Bank city of Jenin. The Gaza-based PIJ identified Farouk Salameh as a “commander” of the terror group.

In a joint statement, the IDF and Border Police said Salameh was involved in the killing of a veteran police commando earlier this year, and planned further attacks.

Israel usually responds with airstrikes against Hamas sites, regardless of which group launches the attack, noting that it is responsible for any attack emanating from the territory. More rarely, he directed his response against Islamic Jihad, if the terrorist group claimed responsibility.

The last time rockets were fired from the coastal enclave into Israel was during a three-day battle against Islamic Jihad in August, in which it launched some 1,175 rockets.

Tensions have skyrocketed in the West Bank recently as the IDF has continued its counter-terror offensive primarily focused on the northern West Bank, although the violence has generally not spilled over into Gaza.

The campaign resulted in more than 2,000 arrests in near-night raids, but also left more than 125 Palestinians dead, many – but not all – in attacks or in clashes with security forces.

Earlier Thursday, Israel said it was removing checkpoints inside and outside the city of Nablus. Israel imposed the restrictions weeks ago, cracking down on the city in response to a new terror group known as the Lions’ Den. The army has carried out repeated operations in the town in recent weeks, killing or arresting the group’s top commanders.

The IDF’s counter-terrorism offensive in the West Bank was launched following a series of Palestinian attacks that killed 19 people earlier this year.

You are a dedicated reader

We’re really glad you read X Articles from The Times of Israel over the past month.

That’s why we started The Times of Israel ten years ago – to provide discerning readers like you with must-read coverage of Israel and the Jewish world.

So now we have a request. Unlike other media, we don’t have a paywall in place. But since the journalism we do is expensive, we invite readers to whom The Times of Israel has become important to support our work by joining The Times of Israel community.

For just $6 a month, you can help support our quality journalism while benefiting from The Times of Israel WITHOUT ADVERTISINGas well as access Exclusive Content only available to members of the Times of Israel community.

Thanks,
David Horovitz, founding editor of The Times of Israel

Already a member? Log in to stop seeing this